I’d always fancied taking part in NaNoWriMo for the pure challenge of it but there were two things that put me off. Firstly, that I actually didn’t have a burning idea for a novel and secondly that I’m not entirely sure a number of words should be the motivator. You see, like calorie based diets, they lead people to obsess over the wrong thing. When you are aiming for a numerical goal, it is the numbers that count but when you are focused on a target, for example changing the make up of what you eat, you focus on the content and what you actually want to achieve.

So this year it has happened that #AcWriMo , an academic focused version of this has synced with my first official month of the PhD. Now as you can imagine at this stage a lot of what I’m doing is exploratory reading and much form filling! What I do also have on the back burner is developing a paper for a conference from an abstract I submitted. This therefore seemed a perfect focus.

The actual volume of words needed to complete these tasks is limited but they are all reliant on that writing being quality. The other motivator for participating is the hope that it will help me get into a writing routine. This is why blogging will also be part of my goals. I find blogging an ideal writing task when i’m getting a block about how to phrase something or when the process is getting me down as it adds variety. It is the same with reading, occasionally you have to move from the academic to the more everyday to spur you on, especially when dealing with complex theoretical texts.

So to outline my goals, I plan to finish my conference paper, finish first drafts of my learning contract and an initial draft of my RDC1 and blog at least twice (in addition to this one) before the 30 days are out. I am not focusing on words but time. I am making space for a hour a day on 5 days a week, plus the option to carry on at the weekends. I’ll be interested to see how it works. Yesterday I started with an hour and managed about 5, although that is not sustainable, it allowed me to make an excellent start of two of the pieces which has given me the enthusiasm I needed to see the benefits of committing to the challenge. If you fancy joining me, all the details are on the PhD2published site.

Recently a few other bloggers including David Beer had mentioned Becker’s Writing for Social Scientists. Having been a fan of his style of writing since I first discovered Art Worlds a few years ago, I was keen to see what sagely advice he had to offer. Interestingly, much of what he suggested are things I already do. Interestingly, the way he suggests writing for getting words down, regardless of quality and worrying about that later is something i’ve always done. I can see how this, to some people would be an huge leap from their current way of working. I never got on with planning in the traditional sense, preferring to get stuff down and them look at how to shape it and it was a relief to see i’m not the only one.

Interestingly, this relief at seeing commonalities between what others do and how beginning academics work is something Becker stresses in the book and I would whole heartedly support this. 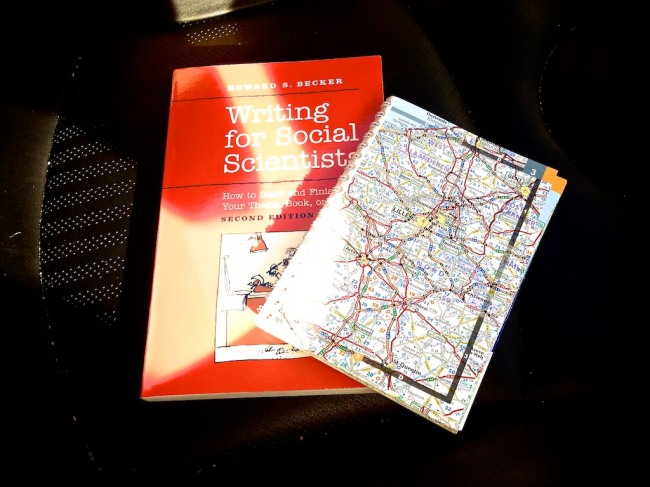 It was no surprise that seeing it sitting on my car seat next to a map was a light bulb moment as it felt like the guidebook that had been missing from my writing. I had figured most of it out already like any explorer of a new place often does, but it was good to see that I hadn’t missed anything important. I think this is the key reason to read this book, if you aren’t sure how to make your writing better then it will help but if you think you know but have niggling worries that you aren’t on the right track, it can help reinforce those ideas.

This second edition examines some of the changes in technology in the twenty years since it was first published, especially in terms of ways in which computers have enhanced the ability for drafting and rearranging ideas and the reduced permanence of the text that is churned out, allowing for writers to take more risks with what they put into being. This, combined with some of his lines of argument about the value of sharing and discussing writing lead me to thinking how the rise of blogs have changed the game even further since 2007.

Becker uses a lovely phrase in chapter three. He says ‘A thought written down is stubbon, doesn’t change it’s shape and can be compared to thoughts that come after it’ (p.56). For me, this forms the crux of why I am finding blogging so valuable for my writing, it allows me to commit those ideas to writing and to share them with other people, not only my close academic network, but more widely. It allows me to ask questions, to float partially formed thoughts and to help develop the thinking by continuing to write about them. This is what many academics have down for years in letters and through discussions so why, in some cases is there a resistance to blogging still by some people?

Becker poses a possible reason why, he says ‘There’s something that I think many of us believe: talking about work is less of a risk than writing about it. In part it’s because no one remembers the ideas you speak.’ (p.118). I wonder if it is an extension of this argument that keeps the discussions in private opposed to in the open on a blog. Maybe if you do not make public your partially formed ideas, people won’t remember all the wrong turns you took., after all, your audiences only want to hear the perfectly formed ideas, not those provisional ones, right?

Wrong! I think if Becker’s book teaches one thing, it is that being open about the writing (and by extension, thinking) process can help combat the intrinsic worry, especially in students and early career academics that they are doing it all wrong. By unveiling the mysticism of the process of idea formation, it opens up an understanding of the true messiness of it. I think when Becker comments about writing his quote could equally be about blogging:

Of course, this is just my interpretation of how his work be translated to the risks and fears of blogging and how blogs can offer ways to address some of the concerns of writing he raises in the book. Maybe he would speak differently?

A jargon-free exploration of hot topics in higher education...

Wanderings of mind, body and soul

Learning from the past, redesigning the future

A blog for theory types

A record of my doctorate study

Educators shootin' from the hip.

This WordPress.com site is the cat’s pajamas

Welcome to my sociological imagination

My journey from fat to fit!

All my banned posts are here!